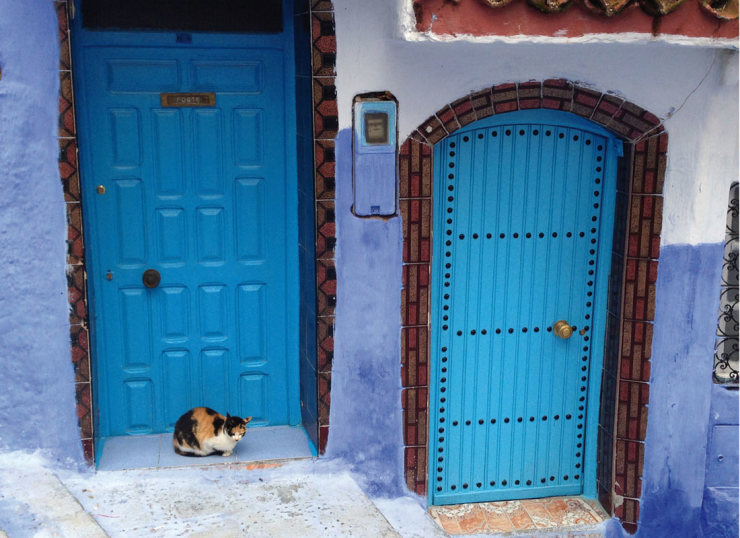 Nestled in the hills south of Tétouan, Chefchaouen, or Chaouen is one of Morocco’s most seductive towns and it is worth spending a few days here to bask in its atmosphere and admire its medina. It is impossible not be seduced by these houses characterised by walls painted in a complete palette of blues and whites, cobbled and winding streets, dotted with small craftsman shops, tiny cafés, small hotels and riads with splendid clematis and bouganvilleas. Here women wear a white veil (heik), as black symbolises mourning. Chefchaouen is fresh in the summer, and in winter it is sometimes covered in snow.
The city was founded in 1471 by a Moor who was exiled from Spain, Moulay Ali ben Rachid, and the kasbah of Moulay Ismail in the 17th century. A veritable fortress destined to halt the Portuguese invasion, it was also a refuge for Moors and Jews fleeing the Spanish Inquisition. Christians were forbidden until 1920, the year of its Spanish conquest. Upon their arrival, the Spaniards found a Jewish community of descendants of the earliest refugees, who spoke Ladin, a language which originated from Medieval Castilian and which had disappeared from Spain over 500 years ago, along with craftsmen who processed leather using the same methods and techniques as their ancestors from the 12th century. From the 30s, they started to paint the walls in blue, a colour which continues to characterise this town. The walls are painted blue once a year and it is said that it keeps away the “evil eye” as well as mosquitoes.