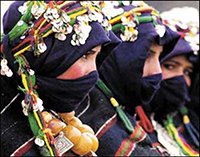 They call themselves “Amazigh”, meaning “free man” and prefer this term to “Berber”, which derives from Arabic and was coined to denote them as “barbarians”, uncouth, ignorant. “Amazigh” (imazighen in the plural) also bears reference to the fact that this population did not succumb to Islam. In this case it was a matter of choice. They have inhabited the Maghreb since the dawn of human civilisation, from Morocco to Egypt, with their own geography and history, rarely involved or considered in political decisions. They are not an ethnic group in the strictest sense of the term, they are rather different groups with one language and various dialects, without a specific way of life: they may be nomads or farmers, rich merchants in cities or inhabitants of villages nestled in the mountains, just like all Moroccans. However they all have a striking awareness of having been here since the dawn of time, as the country’s earliest inhabitants. It is truly remarkable how 1400 years after the arrival of the first Arabic armies, the language has remained not only so wide spread, but also the native tongue among a considerable proportion of inhabitants, especially in rural areas. The origins of this people go back to Prehistoric times, they evolved right here and are characterised by considerable contributions from other populations, including the Arabs. Today Berber identity is not about race, it is rather a cultural and linguistic fact.
A harmonious, polite and welcoming people.
Their language, tamazight, is of Hamitic origin (not Semitic as it is the case of Arabic), with its own letters, and was officially recognised by King Mohammed VI of Morocco, in 2011. Their history features valiant leaders such as Massinissa and Jugurtha, as well as important figures from our own past, including several Roman emperors, especially Septimius Severus (born in Leptis Magna, 145), as well as Popes and saints such as Saint Victor (born in Tunis), Saint Augustine (born in 354 in Tagaste, Algeria). Not to mention a literary tradition which also involves us. Apuleius of Madauros (Algeria), in Love and Psyche, transposed a renowned Berber fable. An ancient population with numerous points of contact with our own culture, fascinating and still there is so much waiting to be discovered.