The holy city of Moulay Idriss – worth a visit! 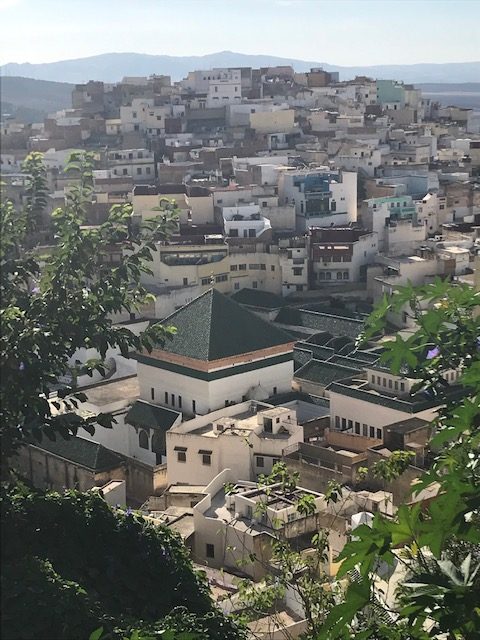 The holy city of Moulay Idriss is located in north of Morocco on Jbel Zerhoun, not far from Fes, Meknes and the ancient Roman ruins of Volubilis.

The legend says that the city has been founded by Moulay Idriss, a descendant of the Prophet, who found shelter here in the VIII century while escaping from Saudi Arabia. Moulay Idriss is the founder of the Islamic religion in Morocco, and he also started the construction of the city of Fes, which was then terminated by his son, Idriss II.

The city is considered holy because it hosts the tomb of Moulay Idriss, and the Moroccan tradition says that if you are not able to go to Mecca once in your life, as prescribed in the Qur’an, you can substitute this by going at least six times to Moulay Idriss during the annual celebration dedicated to the founder. For this reason the city was closed to non muslims up until 1916.

During the visit of this tiny city, you will notice a peculiar minaret: it is round and green, covered with tiles and inscriptions. It was built in 1939, and it stands out because it is only minaret with a circular shape in the whole of Morocco. In the kingdom all the minarets have a square shape, which is a reminiscence of the hispanic-moorish tradition, a sort of “replica” of the christian church towers.

The tomb of Moulay Idriss is hosted in the zaouia, and the current shape is the result of  a XVIII century reconstruction carried out by Moulay Ismail. Further improvements have been carried out under the reign of King Hassan II, like for example the dome, Koubba al-Hassania.

One last tip: when approaching the city do pay attention to its particular shape, which resembles that of a camel.