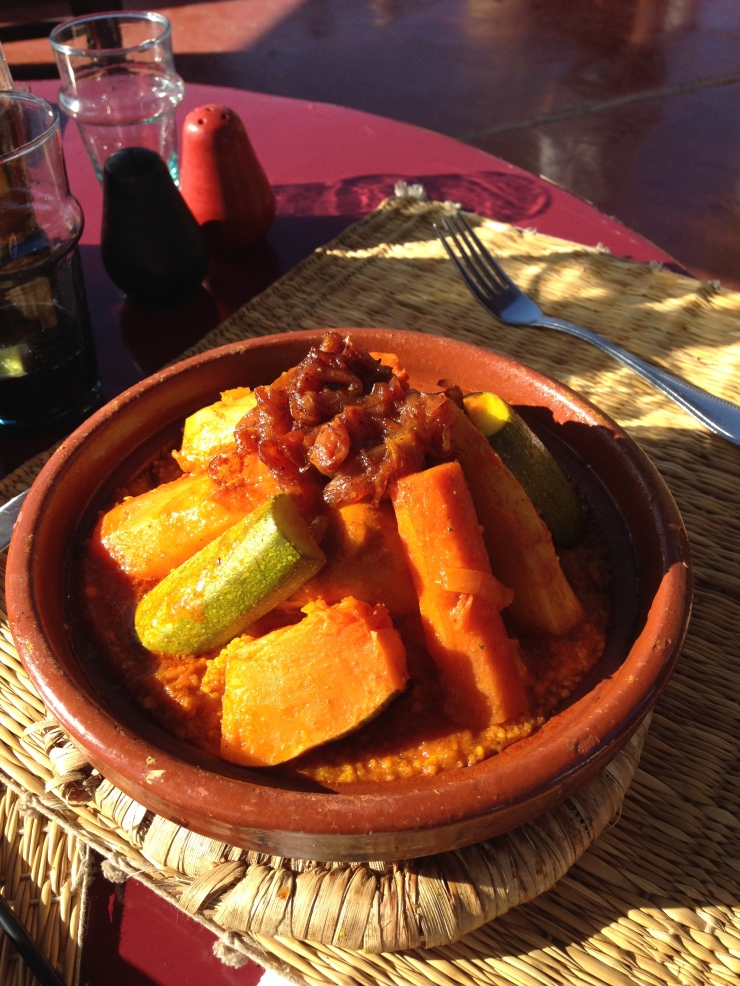 Refined, brightly coloured, aromatic, Moroccan cuisine, whether it is popular or in its more sophisticated varieties, offers an infinite variety of flavours. It is a blend of different culinary traditions: Berber, Arabic, Andalusian, Ottoman and African, but above all it is a style of life and a woman’s art. In Morocco the pleasure of hosting, of offering a meal, hospitality and conviviality are much more than a polite promise. Friends and family get together on many occasions. Every important moment in life is celebrated by an abundant meal requiring considerable culinary preparation.

A round, low table is set. Water is boiled in a kettle ready for tea, rose petals are scattered on the table cloth, everyone washes their hands and the meal begins. Each course is beautifully styled, a sheer feast for the eyes, and only once the head of the household has pronounced the scared “bismillah” (a sort of “in the name of God”), may the meal begin. In general portions are generous and abundant: colourful salads, pastina, grills, fish or tajine. Dishes are meat, chicken or fish based, tajine is named after the terracotta receptacle used in the preparation of the eponymous dish. Bread (kesra) is often used in place of cutlery. On Fridays cous cous reigns supreme. It is a dish of conviviality par excellence served after prayer, for the celebration of births, weddings and funerals. It is piled onto a plate, doused in broth and generously topped with meat, according to the season and region where it is prepared. The preparation of this dish is a veritable art. The semola grains are swelled by the vapour and then separated by hand, only to dissolve on the tip of your tongue, unleashing sheer pleasure for the taste buds. Fish cous cous on the coast, mais cous cous on the High Atlas, cous cous with mussels in the Sous plane or cous cous with figs in the Sahara….this dish is always a moment of celebration.

Tea is always prepared for guests and no meal concludes without the serving of mint tea. Green tea first appeared in Morocco in 1854 and was brought over by English merchants whose access to Russia had been blocked by the Crimean war and the Baltic block. Tea is always prepared using a small bouquet of mint which is bent and placed inside a teapot, it is never cut. Before being served in small, narrow glasses, the tea is shaken, poured twice into the tea pot, then duly tasted by the person preparing it. The tea is then poured from the teapot which is held up high, thus creating a slight froth. Mint tea is always accompanied by small home made cakes using cinnamon, honey, almonds…

Spicy, stimulating or sweet spices confer an unmistakable flavour upon Moroccan cuisine, rendering it unique. They can be bought at the market and are used for meat, fish, vegetables and desserts. Each spice has its own characteristics and qualities. Saffron is an exquisite example, generally sold in whole filaments and cultivated in Morocco in the area between Ouarzazate and Agadir. Flowers are delicately hand picked one by one, in the early winter. Once the orange pistils are removed, they are left to dry. Approximately a hundred thousand flowers are needed to obtain a kilo of saffron. Curcuma with its unmistakable yellow colour, often referred to as the “saffron of the poor”. It is used to flavour meat skewers and eggs. Ginger is used in both sweet and savoury dishes, cinnamon is used to flavour oranges. Chilli pepper should be used sparingly and is often replaced by the slightly sweeter tasting paprika. Coriander (kasbour) is used in numerous dishes, a herb similar to parsley, for a touch of freshness.