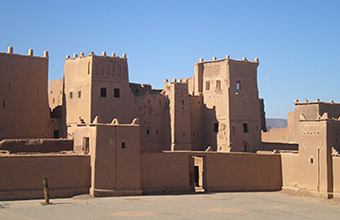 Ksars and kasbahs are typical elements of Berber architecture.
Ksars (the term comes from the Arabic qasr and means castle, or fortified village), is a fortified village consisting of a square (or rectangular) area enclosed by walls. The heart of a ksar, which are generally located in hill areas, contains houses and granaries.
Kasbahs or Qasbas (from the Arabic qa’aba which means citadel, fortress) are typical urban structures, similar to ksars, common in south Morocco. Both are made from earth and characterised by crenellated towers and walls. Numerous examples of this architecture can be found throughout the High Atals, the Dadès, Draa and Tafilalet valleys, which with the passing of time still guard their mysterious origins.
Ait Benhaddou is certainly a famous and well preserved example, located north west of Ouarzazate, classified a World Heritage, as well as Telouet, and many others.