WITH A BOTTLE OF RED SAND ON A DISTANT WINDOWSILL 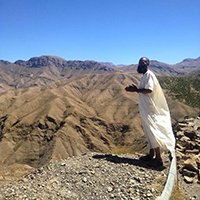 This is what I wrote on my first day in Morocco, on the balcony of a riad in Marrakesh.
“I’m lying here listening to the song of birds, a cock in the distance, the chirping of unknown species. Some feel as though they are right around the corner, others distant, others so close that I ask myself how they manage to hide themselves so well. And I try to pinpoint my thoughts, to think of something precise, but I can’t. Everything goes away before there is even time for it to be fathomed. The mind is in the present, in my here, my now, in what I feel around me and in the magnificent colours before me. Green, ochre, brown, red. And in the blue of the sky, in my skin where I feel the heat of the sun. I missed the sun on my skin so much. The smell of the sun which I had forgotten, as I had forgotten the flavour of the moment. In the distance a man starts to sing a religious litany, unknown to me. I am so used to the association of ideas that it took me a while to realise that this was human song. I perceived it as any noise from any city of my piece of the world, and when I realised that this was not the case, I was surprised and began to follow it.
(and while I was writing all these things I didn’t know it yet but as the days passed that song became familiar to me – and hearing it at certain, precise times was like discovering the cardinal points of my day)
Lying down here on my first day, with the passing of each second I discovered new noises: a slamming door, a cuckoo, a cicada, life which was talking. And the only thing that I can think of is that this is how life should be lived, like a mosaic, a symphony which strikes you first with its design, its melody. And slowly ends up running its fingers along every single dowel, discovering each and every instrument. Life, like in the poetry of Musset. With lightness, which we have long forgotten. Life like a mirror, where for an instant everything stops and everything slides.”
Here is what I wrote as soon as I woke up one morning, in my bed in London, now that I have left.
“The desert left its peace and silence in my heart which cradled my nights and filled it with its colours. Which continue to bring the hot winds to my face, that wind which filled my chest and rendered me light and happy. And the taste of the sun on my skin, the bliss of finally feeling the only valuable thing which truly counts, the moment. The light in the eyes of people of the desert is the same as the one which shines from stars in their skies. My time close to them reminded me that there are so many things we have forgotten. What I observed when close to the people of the desert is that you do not feel thirst if you are not truly thirsty, and that you do not feel hunger unless you are truly hungry. And not to create the future, because most of it comes down to Inshallah – if God wishes.
We have forgotten our connection with the earth, and in the desert it is so abundant that we do not need roads to know where we are going. Perhaps the purpose of roads should not be to indicate direction, but merely to help us along the way because we have found a beaten path which is easier to walk along. Or perhaps I’m wrong. In any case I’m certain that we have lost contact with the earth, and we are no longer capable of even walking barefoot. And what I have seen is that we lose ourselves in reading, writing, photographing, filming. That we freeze the moment without ever being in it. If only there were a way to do both things at the same time, to immortalise the moment but at the same time experience it to the full, then we’d discover the secret and magic of living. And if I’m ever lucky enough to achieve this, I’d feel serene and blessed.
But above all I have discovered that space and time are weightless; all too often we forget that our soul which inhabits them is also weightless.
Writing these things is like impressing them on my soul, and the mere act of doing so makes me feel good. Like this morning when I woke up still thinking about the desert and I felt good. I smiled. And there’s nothing better than doing that when your eyes open up onto a new day.
Who knows if we truly belong to places, whether we are much like trees, but unlike them we can carry our roots around in our pocket.
What I saw was certainly not the idea I had of the desert before my departure. I always dreamed of seeing the desert when I grew up and all the things I saw there were, in some cases, rather distant from the image which I had constructed of it. But that doesn’t matter in the slightest. What counts is that I didn’t miss anything in the desert, in its everything and its nothingness, I really felt good. What a wonderful piece of my life, what a marvellous journey.”
by Elisa Della Scala (who travelled with us in August 2015)